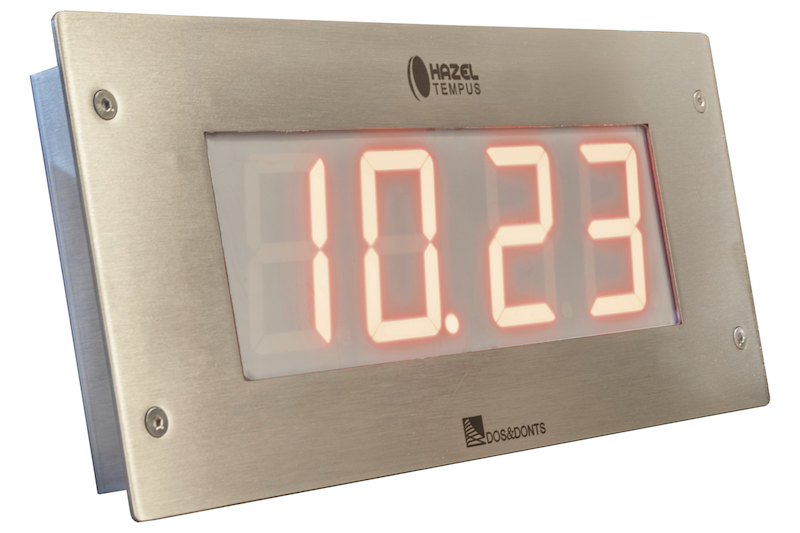 An Industry 4.0 control platform is made up of a complex architecture that integrates the functions of the different systems included within it.

The Hazel®  smart environment-control platform, for example, while enabling the integration of different systems according to user-defined rules and permitting their management through a web based software – also from mobiles equipped with a dedicated app – contains several devices that can also be operated as autonomous elements, such as the wall clock Hazel® Tempus.

This industrial clock has been specifically designed by Dos & Donts to be used in sterile manufacturing facilities  – but it also proves useful in other industrial and non-industrial work environments – and it can be supplied and used independently from the integrated platform.

The need for the pharmaceutical industry to close each production batch filling out a Batch record compliant to GMP rules requires a strict control of exact times along the entire manufacturing process, with monitoring of all its phases and cycles. The Batch record contains detailed information on the time of starting and ending of the production, and other information describing each single passage of the industrial process, e.g. temperatures and concentrations and all the different materials and intermediates used for it. The signature of the Batch record by the in-charged person goes together with documenting also the specific date and time.

To meet the GMP’s requirements, a precise and synchronized time indication through all manufacturing departments is needed.  In the Industry 4.0 architecture, this demand has been catched up by Dos&Donts by proposing  Hazel®  Tempus,  a wall clock developed according to the new paradigms and specifically studied to be placed into clean rooms.

The clock can be freely integrated with smart systems different than Hazel®, and can receive inputs and exchange information allowing for the carrying out of actions at specific time via  the TCP/RTU Modbus protocol. Time synchronization across the clocks present in the different manufacturing units, as well as across the different equipment’s and devices operating along the production chain, is provided by connecting to a NTP server or to a BMS via TCP/RTU Modbus.

The time indicated by Hazel Tempus is clearly visible at each moment to operators thanks to its wide and bright LED 4-digit display. Offering an input and an output, the wall clock also provides actuations functionalities, that can be activated or disabled by a pre-defined time schedule or upon achievement of a specific event .

Furthermore, the auxiliary serial connection allows to use the wall clock in conjunction with other  devices, for example a printer to print out start and ending of a specific operation

Hazel®  Tempus is characterised by a very thin layout (just 41 mm) and can be easily installed into the wall; its stainless steel structure houses a coplanar display, creating a completely flush structure highly resistant to common sanitizing agents used in clean rooms, and making the wall clock ideal to be used within controlled contamination environments.

Once placed on the wall and connected to the facility’s LAN network, connection to Hazel®  Tempus through a specific interface enables the necessary configurations setting.

Hazel®  Tempus can be powered  PoE or 24Vdc; it can provide an alarm in case of synchronization fail with the NTP server. Thanks to the internal battery, the current time is not lost even in case of power fail. Four different alerts are available, which can be pre-set at established times in order to automatically activate – for instance – lights, fans, acoustic alarms or send a signal on Modbus.

If integrated with other systems, Hazel® Tempus allows to activate specific actions – i.e. video recording, emission of light or sound signals, opening of interlocked doors, etc. – upon the achievement of a pre-determined time or event.