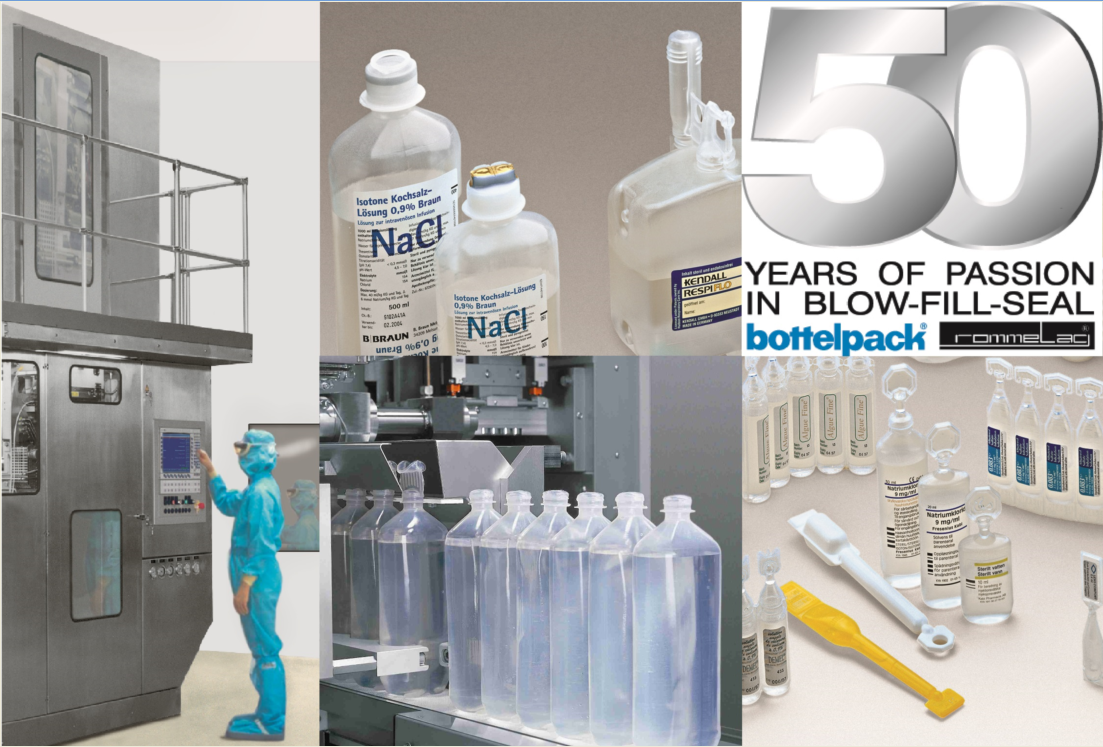 Fifty years ago, rommelag revolutionized plastic packaging technology. A success story of great importance to the pharmaceutical, food and chemical industries. And to the lives of many people

For a change, let’s tell the story in a different way. In January of this year the United Nations Children’s Fund, UNICEF reported that polio had been completely eradicated in India thanks to an unprecedented inoculation campaign. Afghanistan and Nigeria would be next, it announced. Shift of scene: In a vineyard in Germany’s Palatinate region, male grapevine moths are desperately searching for receptive females. But they only find ampoules containing pheromones (female sexual attractants), so the pinot noir can be harvested. Shift of scene: In a hospital in Schwaebisch Hall, Germany, a little girl watches intently as an injection solution slowly but steadily flows into her arm. It will be the last one for her. Then she’ll finally be able to go home.

These are stories from everyday life. They’re about successes, big and small. Different and as widely separated in space as they may be, none of them would be conceivable without a special technological innovation. That’s because each of these liquid or pasty products has to get to its destination – Calcutta, Kabul, the German vineyard or the hospital in Schwaebisch Hall – in some way. And often the contents have to be absolutely sterile.

One person who envisioned these possibilities at an early date was Gerhard Hansen from Oberlausitz, Germany. Born in 1921, he completed an apprenticeship as an electrician and went on to get a degree in aeronautical engineering. Then, like many members of his generation, he saw his career abruptly and painfully interrupted by World War II. His experiences were unusual in the fact that he twice managed to escape from Russian captivity. When he returned to Saxony his burning desire for freedom remained, and he was determined to leave the Soviet occupation zone. Shortly after the German Democratic Republic was founded in 1950, he fled to West Germany. Here he designed machines for extrusion and printing of plastic film. In 1952 he founded his first company, thermo-pack. In 1963 he invented and built his first blow-fill-seal machine. It proved remarkably successful, so he started to look for new sales channels. He decided to establish his international sales organization in Switzerland, and in May 1964 he founded the rommelag sales and marketing company in Aarau. That was fifty years ago. Today rommelag is a member of the Hansen Group headed by CEO Bernd Hansen, with sales companies in Switzerland, Germany, the USA and China. It is the world’s leading supplier of blow-fill-seal machinery, with the brand name bottelpack.

But what has made this technology so tremendously successful over the years? The basic idea is amazingly simple. And it is an idea that continues to be fertile.

It’s a matter of three steps. All bottelpack machines operate according to the blow-fill-seal principle. In one single automatic process they create containers from thermoplastic granules (blow), filling in the products (fill) and close them (seal). This BFS technology has numerous advantages over conventional packaging methods: the products contain no preservatives or contaminants; the process is fully automatic, which saves time, space and labour; the containers are sealed, unbreakable and collapsible; and maximum product safety is ensured at all times (the containers are aseptic and tamper-proof).

The idea is fertile in the sense that it has been generating new innovations for five decades, almost automatically. As an example we can mention the recently developed aseptic CoEx bottelpack packaging system, which is based on the BFS principle. Whereas the early BFS machines were mainly used to make containers for milk, vegetable oil, soft drinks, cosmetics, liquid detergents, chemicals, herbicides, technical fluids, etc., today the emphasis throughout the world is on pharmaceutical products: aseptic packaging of sterile liquids, creams and ointments. bottelpack machines permit sterile, pyrogen-free manufacturing of containers, aseptic filling of sterile products and hermetic sealing in a special US class 100 (ISO 3) cleanroom. In addition, CoEx bottelpack machines can manufacture multi-layer containers with special barrier layers for packaging highly sensitive products. In co-extrusion different plastic materials are extruded together in the form of multi-layer tubes to achieve optimum combinations of material properties such as gas diffusion, elasticity and rigidity.

The idea is also fertile because it has led to the creation of more and more new containers and closures through a process of continuous development and optimization. The aim has been to fulfil the special requirements of customers, meet the increasing demands in today’s healthcare sector and respond to the growing need for mobility. Examples are ready-to-use products like syringes with integrated injection needles, ampoules with a Luer fitting that does not require a separate needle to withdraw the container, and unit-dose ampoules for eye drops, nose drops and ear drops with integrated dispensing chambers that eliminate the need for preservatives. There seems to be no limit to the functions, which are usually developed in close cooperation with customers.

The critical criterion is safety

The critical criterion, never questioned, for each new product is safety – for the process and for the product itself. There must be absolute sterility during the aseptic filling process and a perfectly hermetic seal during the storage period. Human safety is the foremost concern. All people at rommelag are aware of this existential responsibility.

And the company does a lot to ensure this. Although BFS technology does not require the cleaning and sterilization processes of individual containers prior filling that are essential in other kinds of container production, bottelpack machines can be equipped with a wide range of safety, quality assurance and monitoring modules in order to achieve 100% aseptic production. In this way they also comply with government standards such as those of the U.S. Food and Drug Administration (FDA). The modules include systems that use pure steam and sterile air to clean and sterilize lines that come into contact with products. Other modules test containers for leaks, inspect them for particle contamination and automatically eject defective items. In addition, there are devices for testing ampoules during production, monitoring cleanroom air, etc. In spite of all these safety mechanisms, BFS systems can produce more than 34,000 containers per hour in sizes from 0.1 ml to more than 1,000 ml – impressive proof of their technological maturity.

To achieve this level of efficiency, rommelag coordinates the planning, commissioning and maintenance of its systems with each customer individually. Close contacts with customers are undoubtedly a major reason for the company’s success. The services include remote diagnostics systems, customer training at the bottelpack Training Center and deployment of specially trained service personnel all over the world. Thanks in no small part to subcontracting by its sister companies Holopack in Germany and Maropack in Switzerland, rommelag is able to offer a diverse range of products and services for packaging of liquids, including vaccines. It provides support to its customers in manufacturing trials, contract manufacturing, process development, qualification and validation. Customers can even move their bottelpack machines to Holopack Pharma 2020 for production.

The most relentless competitor can be named in one word: glass. Some traditions have a persistence that defies rational explanation. Glass may have a nostalgic appeal, with deep roots in medical history, but it is outdated as primary packaging in many applications. To give a typical example, the WHO recommendations for safe inoculation warn explicitly against fragments from broken glass containers. Nothing could be easier than to rule out this risk by using plastic containers and closures that cannot shatter.

Plastic materials offer a number of advantages to manufacturers and users of infusion containers and ampoules. Modern plastics are strong enough to be made very thin without risk of breaking, and they are easily collapsible so that ventilation is not necessary. They are chemically inert, free of additives and highly impervious to water vapour. Handling is easy and safe, not only in hospitals but also in mobile operations. This is why bottelpack systems are coming into increasing use as a means of providing high-quality products to people in countries where the healthcare system is still in development. Not surprisingly, China and India have become important markets for rommelag.

At the same time plastic packaging is friendly to the environment. Disposal and recycling leave no residues. Thanks to bottelpack technology these pure materials can be processed without using extra active additives.

Thus rommelag has a lot of things to tell the world about. We can only wish that it succeeds. After all, what’s at stake is people’s most valuable asset: their health.