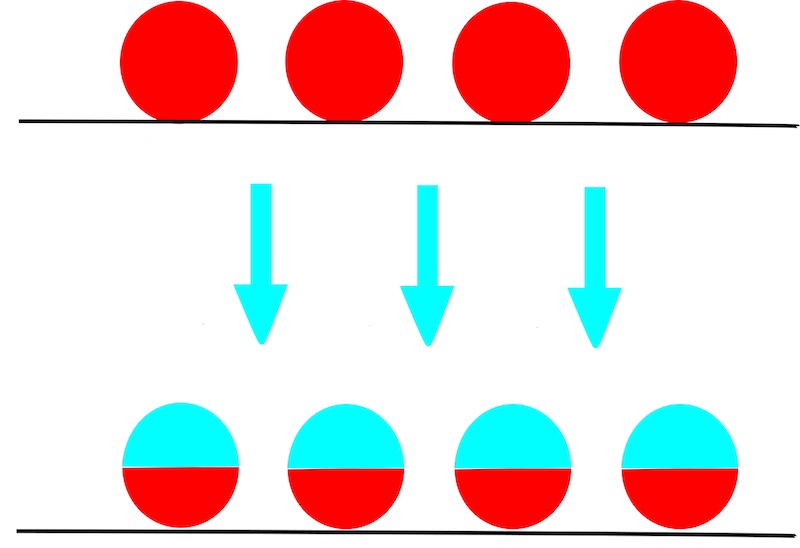 Janus is the name of the Roman god characterised by having two faces, one looking ahead to future and the second back to the past. As a symbol of beginnings, its memory is recalled by the month of January, when the new year starts. He was also the guard of doorways, a characteristic far more closer to the current use of the term to identify a very peculiar type on nanoparticles.

Janus particles (JPs) are asymmetric nanoparticles having two distinct faces characterised by completely different composition, chemical-physical and/or mechanical properties. Their great flexibility in behaviour makes JPs suitable for several applications in the biomedical field, for example for site-specific drug delivery, gene and vaccine delivery, or in imaging and as biosensors. We provide a brief excursus on the chemistry and possible applications of Janus particles.

Anisotropy is the main structural feature of Janus particles, i.e. their characteristics depends on the specific direction from which they are observed (see more on Int. J. Nanomed.). We can imagine a typical Janus particle as sphere having its two halves made of completely different materials, even incompatible ones. As exemplified by the Roman god, one of such particles may present dramatically different properties on its two sides, for example in terms of hydrophilicity/hydrophobicity, polarity, charge, electric or magnetic properties, etc.

Janus particles can also present as nanorods and other geometries, such as dumbbell-like, snowman-like, or platelet-like shapes (see more in Colloid and Polymer Science). More in general, nanocarriers for biomedical applications (including JPs) can also assume the form of block copolymer micelles, liposomes and dendrimers, and different morphologies (i.e., cylindrical, spherical or disk-like; see more in Design and Development of New Nanocarriers).

The chemistry leading to the synthesis of Janus particles has greatly improved since their first mention in 1991 in the Nobel lecture given by Pierre-Gilles de Gennes. Today, a great variety of materials with different properties can be coupled, i.e. different polymers or metals, lipids, and even DNA and proteins. The main three typologies of JPs include hard (inorganic), soft (organic or polymeric), and hybrid (organic/inorganic) Janus particles. A careful planning of the size, shape and the other properties (i.e.porosity, charge, mechanical properties, etc.) is needed in order to obtain the desired effect, as a change in one of the particles’ properties may affect all others (see more details in Materials Today Bio).

Synthesis is achieved by a variety of techniques, usually with immobilisation of the core particles on a support and subsequent functionalisation of the exposed half moiety, for example by mean of phase separation, masking, self-assembly, surface nucleation and seeded growth, pickering emulsion formation, microfluidic photopolymerization or electrospinning.

Examples of polymers used to obtain different loading compartments for selective drug delivery include poly(ethylene oxide) and poly(acrylamide-co-acrylic acid) for one half, and a crosslinked copolymer of dextran and poly(acrylamide-co-acrylic acid) segments for the other. The environmental sustainability of Janus particles can be pursued by the use of biocompatible raw materials to build the nano-constructs; polysaccharides such as chitosan, alginates, pectin, cellulose and heparin are some possible examples of biogenic materials undergoing natural biodegradation, as well as polypeptides. Other possible biocompatible and biodegradable materials are poly(lactic acid) (PLA), poly(lactic-co-glycolic acid) (PLGA), and polycaprolactone (PCL).

The formation of lyotropic liquid crystalline compartments, or lipid regions with different geometries (e.g. cubic vs diamond-cubic or hexagonal) are other possibilities for the formation of JPs. Heavy metals and their oxides are often used to produce inorganic Janus particles; this sort of materials (e.g. Au, Ag, Cu, Pt, Ni, Yb, Tm, Fe3O4, NaGdF4, mesoporous silica) can also be functionalised with antibodies or mRNA. Mixed polymers-inorganic JPs are also possible, offering the advantage of a better control of their anisotropic growth. They are used, for example, as theranostic agents, i.e. coupling a therapeutic and diagnostic moiety on the same nanoparticle.

The peculiar characteristics of Janus particles may be also used to favour their recovery and recycling after use. If centrifugation and filtration appear to have a limited application, far more useful is their recovery by interaction with magnetic fields, in the case of nanoparticles made of ferromagnetic materials. Immobilisation on inert or enzymatic supports are other possibilities to enhance recycling.

The targeted delivery of combined therapies is one of the possible examples of application of Janus particles in pharmaceutics. The same particle can be loaded, for example, with a hydrophilic API on one side and a hydrophobic API on the other, thus enabling dual release patterns dependent on the specific local conditions at the desired sites of action, or on the independent release kinetics of the two drugs. A typical example is the combination in the same JP of paclitaxel and doxorubicin, or doxorubicin and ibuprofen.  Depending on the materials used to build the compartments, drug release may be activated by pH changes, ionic strength, heat or irradiation with UV or near infrared light, for example. Inorganic Au-Ni Janus nanorods have been studied also for the non-viral delivery of genes and vaccines.

Furthermore, if one half of the particle is loaded with an imaging dye, then it is possible to follow the on-site release of the pharmaceutical active ingredient by mean of nuclear resonance (NMR), tomography  (TAC) and other diagnostic technologies.

Nanomotors made up of Janus particles are another type of construct with many potential applications in the biomedical field, as they may be guided by light or magnetic fields to the desired body compartment to deliver their action, and then even undergo self destruction to biocompatible substances.

According to the IJN article, very few examples are available up to now of studies on the in vivo properties of Janus particles. In 2009 for example, reports an article in Current Pharma Research, a bio-hybrid material with spatially controlled affinity towards human endothelial cells was synthesised showing the ability to associate all around the perimeter of cells forming a single particle lining. 2-dimethylaminoethylamino methacrylate (DMAEMA) and monodispersed poly(2-hydroxyehtyl methacrylate) (PHEMA) have been used, for example, to produce Janus particles of different morphologies using seeded emulsion polymerization. The dumbbell-like and snowman-like nanoparticle were then further investigated as possible simultaneous carriers of ibuprofen and doxorubicin (see more in Colloids and Surfaces B: Biointerfaces).