The death of dopaminergic neurons might represent a possible cause of the Alzheimer disease, as well of Parkinson, tells the neurophysiologist Marcello D’Amelio. His team at the Campus Bio-Medico University, Rome made important discoveries that might have a future impact on the treatment of many neurodegenerative diseases

«The idea that different types of neurodegeneration might have a common basis is not new: our results open new and interesting perspectives. The midbrain may play a fundamental role, common to both Parkinson and Alzheimer diseases». Neurophysiologist Marcello D’Amelio is the leader of the team at the Campus Bio-Medico University, Rome and Fondazione S. Lucia those results might represent a final blow against neurodegenerative diseases. Alzheimer and Parkinson (Highlights on dementia) are two among the main health emergencies affecting the world population and their impact is progressively growing due to ageing.

A new role for the dopaminergic system

According to the research group, the leading cause of the Alzheimer disease would be an alteration of the dopaminergic system. This represents a marked difference with respect to the currently accepted cause of the disease, i.e. a degeneration of brain areas related to memory. According to the new results, the first brain area interested by the degeneration would be the ventral tegmental area (VTA) of the brain. Its degeneration would occur much prior the appearance of the formation of amyloid plaques, which is a typical anatomic-pathological characteristic of the disease.

The VTA area is populated by neurons responsible for the production of the neurotransmitter dopamine. Its early degeneration thus implies a reduced flux of dopamine towards the hippocampus and the nucleus accumbens, as well as towards other cerebral areas. When these two structures are functionally altered they might cause problems similar to those observed during the first stages of the disease: apathy and memory failure. «The identification of the derailment of the dopaminergic circuit represents the new item of our research, that put together all the current literature – explains Marcello D’Amelio. – Dopamine is no longer available to the different cerebral areas, as the one producing it is facing degeneration». D’Amelio is professor of Neurophysiology ad the Campus Bio-medico University and director of the Laboratory of Molecular Neurosciences at the IRCCS Fondazione Santa Lucia, Rome. His team studies the molecular and functional modifications that occur in the course of neurodegenerative diseases. The group published in April 2017 in Nature Communications1  the results obtained on the murine model of Alzheimer Tg2576: the mice overexpressed a mutated precursor of the human amyloid protein (APPswe) and it represents one of the more robust research model to study Alzheimer. According to the paper, the typical symptoms of the disease – i.e. loss of memory, anxiety, apathy and reduced appetite – would be the result of a loss in the synaptic plasticity.

The challenge is still open

The new mechanism proposed for the Alzheimer disease is only the first step towards the practical applications on patients: the way is long and full of new challenges still to be solved. New neuro-diagnostic methods are required for an early and firm diagnosis of the disease at VTA level. D’Amelio’s group is collaborating with neuro-radiologists at the IRCCS Fondazione S.Lucia (http://www.hsantalucia.it/) and other specialised hospitals in order to better investigate the ventral tegmental area of the midbrain in early phases of the disease using functional magnetic resonance. «We want check that this area is actually disconnected in patients from the rest of the encephalon, thus loosing its normal projections with the other areas of the brain», tells D’Amelio.

But the main challenge remains therapy: the identification of a new cause for neuro-degeneration may lead in coming years  to the development of a new and effective treatment for Alzheimer. The disease is currently addressed only with symptomatic drugs, in order to slow down its progression. As Marcello D’Amelio tells NCF Pharma World, the researchers in Rome have very clear ideas on how it works the mechanisms of neurons’ death in the midbrain. «We now have to understand how we can protect them. There are many different molecules under clinical development for the Parkinson disease: we are validating their efficacy in our Alzheimer model. Clinical development for the two pathologies might proceed in parallel in the future». Such an hypothesis would be much easier to become true as the new data from functional magnetic resonance will confirm that the protection of dopaminergic neurons shall be the common therapeutic target for the two different type of senile dementia. According to D’Amelio, a couple of years are still needed to reach firm neuro-radiological evidence on the role and extent of the ventral tegmental area in the development of the diseases. The pre-clinical screening of candidate molecules should require further two-three years of investigation. Another line of clinical investigation is centred on the possible use of dopamine’s agonists (Main dopamine agonists). «We are studying the therapeutic efficacy of molecules able to increase the dopaminergic function of the brain, so to slow down the memory loss and improve its functioning in Alzheimer’s patients», tells Marcello D’Amelio.

Another challenge for the group in Rome implies the identification of the so called “sporadic forms” of the disease, that do not have a genetic basis. They represent 95% of the diagnosed Alzheimer cases. D’Amelio tells about the possible role of the VTA area studied in animal models of the sporadic forms.  «Such models are obtained through exposure to particular toxins or by use of protocols that replicate some of the risk factors of the disease. The important role paid by the beta-amyloid and the fact that VTA neurons are easily liable to death are the more interesting features of the research. We are not surprised, as from the functional electrophysiological point of view they are very labile and delicate neurons».

The rapid death of dopaminergic neurons represents a completely new point of view on the Alzheimer disease. Prior to the publication of the paper from D’Amelio’s group, the more scientifically sounded hypothesis on the origin of Alzheimer was based on a central role played by the hippocampus, the cerebral area controlling memory. The new data shift the attention of the deep midbrain area, which controls both the hippocampus and the limbic system (that controls mood and motivational impulses). «All the dopamine in the brain is produced into the midbrain, that is divided into the VTA area and the substantia nigra pars compacta. The Parkinson disease also relates to dopamine, in a symmetrical way with respect to Alzheimer», explains the expert. Classical motor symptoms that are observed in Parkinson’s patients are in general attributed to the early degeneration of the substantia nigra pars compacta, thus resulting in a reduced dopamine’s release into the striatum that leads to the typical tremors. Neurons in the VTA area undergo degeneration in a later phase of the disease, with appearance on the no-motor symptoms of the Parkinson disease (i.e. reduced emotions). «According to our data on Alzheimer, it appears to be the exact opposite:  the first neurons undergoing degeneration are the VTA’s ones. In a more advanced stage of the disease neurons of the substantia nigra pars compacta also partially degenerates. Some patients with severe Parkinson disease present also motor symptoms», tells Marcello D’Amelio.

The rational of the new vision

D’Amelio’s research group based its initial assumptions upon several fragmented information already reported in the scientific literature. Some studies of transcranial magnetic stimulation on Alzheimer’s patients2, for example, have demonstrated a role for the cerebral plasticity of the primary motor cortex. «This plasticity is completely restored upon administration of rotigotine (a dopamine agonist used to treat Parkinson) for four weeks – tells D’Amico -. The TVA area richly innervates the primary motor cortex: the data obtained from the transcranial magnetic studies were interpreted up to now as the result of a degeneration within the projection areas of dopaminergic nerve terminals. No prior investigation was made on the possibility that the dopamine producing area might itself degenerate, and dopamine might no further reach projection areas».

Another starting point is represented by a seven years long longitudinal clinical study carried on patients affected by dementia in the course of their life. The results published in Neurology3 showed a progressive reduction of the memory function coupled with the alteration of mood (anxiety, apathy, agitation) and appetite modification in patients with Alzheimer. The working hypothesis of D’Amelio’s group was based on a parallel impairment of both memory and motivational cerebral areas and on the early degeneration of a common area able to activate them both: the ventral tegmental area. VTA projects dopamine both into the hippocampus and the limbic system, as well as in the primary motor cortex. «This hypothesis explains the recovery of transcranial magnetic stimulation upon administration of dopamine and the parallel deterioration of the memory and motivational functions», tells D’Amico. The loss in memory and motivation has been studied in animal models, the second one using chocolate consumption as the stimulus, and confirmed the parallelism. This relates further to a massive death of VTA’s dopaminergic neurons. The hippocampus and the limbic system did not showed any sign of degeneration. «We measured dopamine levels into the hippocampus and the nucleus accumbens, demonstrating that this area are reached by less dopamine as a consequence of the early dopaminergic neurons’ death», explain the team leader. A further confirmation of this hypothesis has been obtained by administration of dopamine precursor levo-dopa and selegiline (an inhibitor of monoamine oxidase enzymes that degrade dopamine): in both cases an increase of dopamine availability has been observed in the hippocampus as well as in the limbic system. Memory and motivational functions were both restored. «Our model allowed to verify that the main damage occurs in the VTA area. This damage impacts at a secondary level of projection area, hippocampus and limbic system», concludes Marcello D’Amelio.

Alzheimer represents the 50-60% of all forms of dementia. 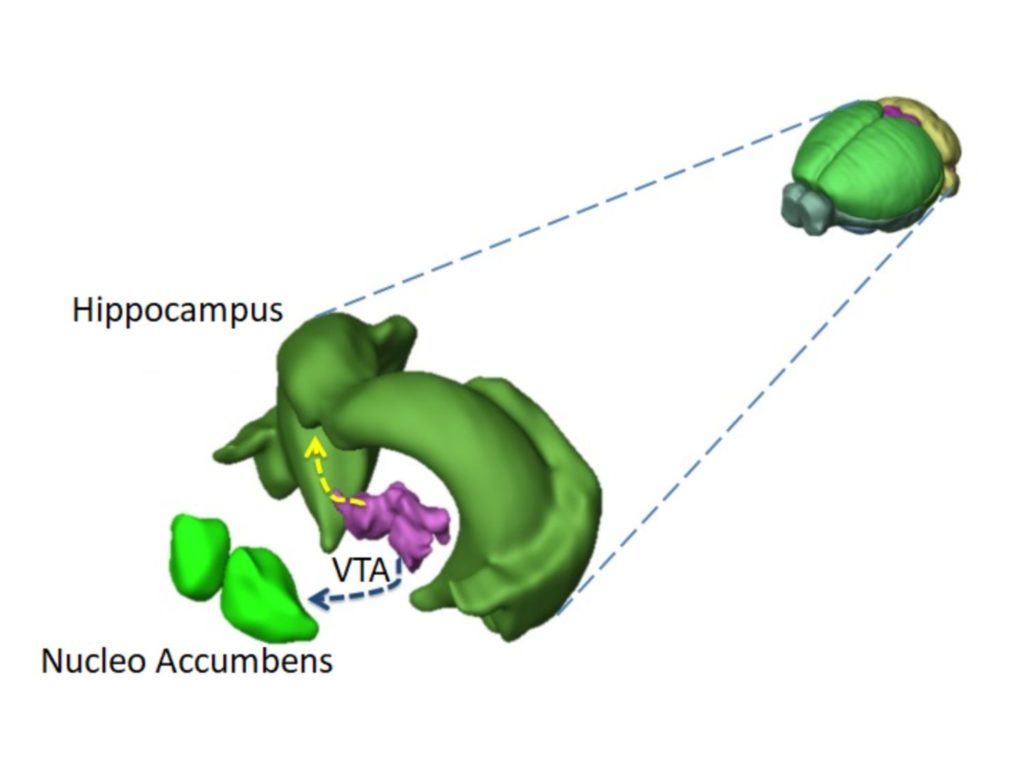 Figure 1 -The illustration reproduces the VTA area, where dopamine is produced. Arrows indicates the release of the neurotransmitter in the two areas related to memory (the hippocampus) and motivational function (nucleus accumbens). These areas, together with some other not present in the illustration, constitutes the mesolimbic pathway.

Marcello D’Amelio group demonstrated that the VTA undergoes an early degeneration, thus causing a reduction in the release of dopamine followed by degeneration of memory and motivational functions of the brain.