An Italian pride, the first advanced therapy based on stem cells approved in February throughout the European Union, born in the city of Modena. We are talking about Holoclar®, a stem cells treatment used in the eye to replace damaged cells that can restore the sight to those who have suffered of severe burns of the cornea. «Holoclar is the first product of advanced therapies based on stem cells approved and formally registered in Europe», said Andrea Chiesi, CEO of Holostem Terapie Avanzate. Holoclar is the result of twenty years of research led by a group of internationally recognized scientists in the biology field of epithelial stem cells, driven by Michele De Luca and Graziella Pellegrini who conceived all stages of the drug development; the treatment has been produced in Holostem Terapie Avanzate laboratory, a spin off of the University of Modena and Reggio Emilia (UniMoRe), at the Regenerative Medicine Centre “Stefano Ferrari” (CMR) of the University of Modena. 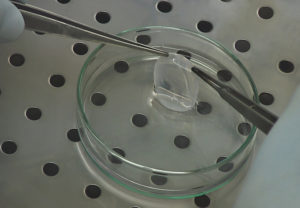 The De Luca and Pellegrini’s group was born in Genova in 1988 at the Scientific Institute for Cancer, where De Luca arrived after two years in the US. In those years the knowledge about stem cells was really scarce and the scientific community itself was skeptical. But their passion and desire to achieve a real result pushed them to move forward gaining today a great achievement. With this goal, along with their valid collaborators, over the years they have tried to rebuild various epithelia of covering, such as urethra and oral mucosa, on which they are still working on. The major results arrived in the field of transplantation of corneal epithelium and Epidermolysis bullosa, better known as “Butterfly Disease”.

«It is not a coincidence that we have a first position in Europe – said De Luca. – Our great strength was the close collaboration between the public institution, that provided a scientific background and broad experience and the private enterprise that provided its expertise in the regulatory».

Holoclar is a type of advanced therapy product called “tissue engineered product” for advanced therapies (EC Regulation n. 1394/2007). It consists of cells taken from the patient’s limbus (at the edge of the cornea) and then grown ex vivo in a laboratory so that they can be used to repair the damaged corneal surface.

The Holoclar active ingredient is represented by limbal stem cells contained in it. In 1997, with an important publication in Lancet, the De Luca Pellegrini Group proposes a technical prototype of stem cells cultivation taken from the limbus for the cure of specific corneal injury due to burns, contact with chemicals or serious damage post-infectious which a normal transplantation does not work. In 2001 the technique becomes standardized and opens a new chapter in regenerative medicine in ophthalmology. In the first stage of the treatment, under local anesthesia that takes around 15 minutes, a small part of healthy limbal tissue (1-2 mm) is taken from the patient; then, from the tissue, in the laboratory, all proliferating cells needed to recreate a small portion of cornea are selected and, after 16-17 days it can be implanted in the individual. However, for this technique it is necessary that at least one millimeter of limbus of one of the two eyes is not damaged.

A small subpopulation of the proliferating selected cells grown on a carpet of fibrin, defined holoclones, is the one that will enable the renewal the corneal epithelium for all stages of life. The great potential of this technique soon spread out and has been supported by several studies including, in 2013, a multicenter research trial. Since 2008, the research continued in the GMP laboratories, a Holostem spin off.

«The introduction of European Regulation 1394/2007 – explains Chiesi – made the products for advanced therapy equal to more traditional drugs and it laid the foundations for the creation of Holostem Terapie Avanzate Ltd: also the De Luca and Pellegrini products are subject to pharmaceutical legislation and regulatory evaluation of the European Medicines Agency. In this sense the spin off is a great vehicle instrumental grouping within itself all the necessary elements: the technical- scientific know-how of the researchers, the Unimore Pharmaceutical Lab and the regulatory and pharmaceutical competence of the Chiesi Group. The presence of various skills within it, allowed Holostem to carry out the appropriate studies to obtain the registration of Holoclar and, in order to retrieve clinical expertise occurred before the promulgation of the European Regulation, and along with the Chiesi departments – who financially supported the entire operation – it assemble the registration file according to pharmaceutical standards, and allowed to deposit it at the EMA and finally to obtain the registration of Holoclar in Europe.

A similar procedure will be put in place for future products that Holostem intends to develop in other rare diseases, always derived from the experience of the researchers De Luca and Pellegrini».

In 1994 the research group comes across another challenge: isolating stem cells of epithelial covering of patients with genetic diseases, replacing the deficient gene with genetic therapy, and from these modified cells create flaps of skin to be implanted. The aim of the challenge was initially against a serious skin genetic disease known as junctional epidermolysis bullosa, in which there is a mutation on one of the three chains that form the laminin 5. After a hard work for the creation of a retroviral vector, that has all the eligibility requirements as well as an efficiency of infection close to 100% and to achieve a protocol that can also provide the care of patients skin infections, the team was able in 2006 to carry out the first operation in the world.

«This work, which is followed by another one in 2012 – said De Luca, – is extremely important and lays the foundation for the development of this additional branch of cell and gene therapy, just as it was with the first publication in Lancet regarding Holoclar. Then, the team developed a gene therapy protocols also for epidermolysis bullosa forms with mutation of the collagen 7 and 17 and eighteen months ago, EMA recognized these two products, together with the one for the epidermolysis bullosa form linked to the mutation of laminin 5, orphan drugs. Another important step that follows the footsteps of the development of Holoclar», adds De Luca.

«The next stage – says Pellegrini – Is the connection with other European centres to spread the therapy (e.g. the one in Salzburg)».

The main objective of Holostem Terapie Avanzate is to promote the Regenerative Medicine based on the use of epithelial stem cells for patients with no other therapeutic options. University spin-off founded in 2008, Holostem Terapie Avanzate is the first biotechnology company in the world solely dedicated to the development, production, registration and distribution of advanced therapy products based on the culture of epithelial stem cells for cell and gene therapy. For this reason, the company invested 16.5 million Euros in R&D from 2008 to 2014 and developed a 2000 square meters GMP Lab with 17 rooms fully equipped and independent class BL2 entirely dedicated to the cell culture, quality control and preparation of culture environment and reagents. 26 employees and as many consultants are currently working in Holostem (3 employees undergraduates, 17 graduates, 6 PhDs).

The sample for the biopsy and the subsequent Holoclar transplant will occur in clinical centres identified and appropriately trained by Chiesi throughout Europe. Biopsy is the first step: the sample goes to Modena, where the courier delivers it to Holostem / Chiesi within 24 hours. At this point begins the development process of Holoclar that takes a few weeks. Depending on patient condition, it is then detected the transplant date and Holostem /Chiesi is able to deliver Holoclar within 36 hours. Part of the tissue is cryopreserved and can be used for a possible second transplant.

Michele De Luca began working in the American laboratory of Howard Green, the founding father of regenerative medicine where he learned to cultivate epidermic stem cells: afterwards he exports in Europe all this knowledge, working at the National Institute for Cancer Research in Genova (Ranieri Cancedda laboratory), where he met Graziella Pellegrini. From this moment began a scientific partnership that leads them to deepen the study of biology and molecular mechanisms of stem cells of many epithelial covering.

Graziella Pellegrini and Michael De Luca were passionate about the study of ocular surface stem cells, identifying and characterizing the stem cells of corneal and conjunctival epithelium as well as identifying the main markers of stem cells limbo-corneal and defining the molecular mechanisms that regulate the self-renewal, proliferation and differentiation. Among other things, the two researchers identify a transcription factor (p63) the molecular marker that will underlie the development of Holoclar and define the parameters essential to its clinical efficacy.

It was published on Lancet the study, in collaboration with Carlo Traverso, that presents data from the first experimental protocol for the clinical application of limbo-corneal stem cells never proposed and here applied successfully on two patients with burns and corneal limbal stem deficit. It starts the fundamental partnership with Stefano Bonini, Alessandro Lambiase and, above all, Paolo Rama who develops the clinical protocol that, together with the knowledge of the biology limbal stem cell in the meantime, further developed by Pellegrini and De Luca, it will be the base element for Holoclar.

The data of 18 patients treated with stem cells limbo-corneal and the new Protocol are published on Transplantation. It is the most convincing proof of the efficacy of the therapeutic principle of the method. From now on, hundreds of patients are treated according to the new protocol.

European Regulation 1394/2007 sets out the quality requirements to be adopted for cell cultures used for medical purposes. In Modena the construction of the Centre for Regenerative Medicine “Stefano Ferrari” is ready; here De Luca and Pellegrini will work together.

On 23 June 2008 Holostem Terapie Avanzate was born. Created as a spin-off of the University of Modena and Reggio Emilia with Chiesi Farmaceutici, it represents today the biotech reality in the forefront at international level. In November, the therapy obtains the Orphan Drug designation.

Thanks to Holostem Terapie Avanzate, The Centre for Regenerative Medicine “Stefano Ferrari” obtains the certification of Good Manufacturing Practice (GMP) by AIFA. In the New England Journal of Medicine the results of 112 patients treated throughout the course of more than 10 years: the sight has been restored and maintained in 76.6% of cases.

The technology receives its final scientific consecration in a multicenter clinical trial that involve dozens of Italian ophthalmologists published on Regenerative Medicine.

Holoclar obtains the registration and marketing authorization by the European Commission.