The new report “Human genome editing: Science, Ethics and Governance“ was released in January 2017 under the auspices of the US National Academy of Sciences and National Academy of Medicine, the Wellcome Trust and the British of Chinese Academy of Sciences. It represents the first, albeit very cautious, opening of the international scientific community towards the possibility to use gene editing techniques to also modify germ line cells, and not only the somatic ones. The working group that drafted the first recommendations for the governance of this rapidly growing emerging field included representatives of research and medicine as well as philosophers and experts of bioethics and social sciences and representatives of the different cultures and religions, such as the head of the Library of Alexandria (Egypt).

The permanent members of the working group met all the different stakeholders, including industry, biotechnology, religions, patient organizations and minorities. The final document, published on this website, summarizes and mediates among all different opinions that emerged during consultations. «It was a complex process: it has been difficult to reach an unanimous consensus of the recommendations on issues such as the possibility to modify the germ line», tells NCF geneticist Luigi Naldini, the member of the working group representing Italy. «In general, many respondents showed prudence or even closure, while others were far more open. What matters is the final result: we managed to clearly limit the possible way to proceed. There is a very cautious opening: as a scientist, it is always difficult to close the door to new technologies and possibilities, but it was necessary to take into account all the positions».

Research on germ lines only under many safeguards

«This has been the most controversial topic we faced. The current techniques of gene editing make no longer inconceivable to avoid the transmission of a genetic disease to offspring. This would represent no longer the treatment of a disease, but a form of prevention», underlines the geneticist, who heads the San Raffaele Telethon Institute for Gene Therapy (SR-Tiget). Research on germ line cells would impact on procreation and on the transfer of the genetic inheritance, a sphere of the human life that is traditionally considered “off limits” by all cultures. «In any case, it is necessary to start from the scientific basis in order to assess the implications: today we are not ready, technologies are not sufficiently proven and safe, but we expect them to be available quite soon», says Naldini.

Experiments on in vitro models are already ongoing in countries where research on human embryos is permitted, such as Britain, China or the United States (in this latter case without public funding from the National Institutes of Health). The question to be answered to determine whever there is a real opportunity to use germ line cells regards the actual existence of a medical need, tells Naldini.

«There is no patient to be treated; there is the need of a person carrying a disease who wants to have a genetically-related child and to prevent the transmission of the disease. The great part of these cases is currently managed through pre-implantation genetic diagnosis and possibly with the therapeutic abortion. As per now, the indication for gene editing on the embryo is very modest, even if the technique was safe», says Naldini. According to the expert, the few cases in which this could be possible might enjoy an ethical justification, based on the prevention of the transmission of the defective gene.

«We left the door ajar to these applications, under a very strict control. Research targeted at modifying the human germ lines is still prohibited by law in many European countries. With this respect, Great Britain is so far the more open ones. The situation is quite varied among nations, the diversity of approaches can also represent a value. The primary concern addressed in the document is to open the door to a technology which might then escape control», adds Naldini. The group of experts long debated the various options that might be used to hold such an event and the risks related to a possible drift, tells the Italian representative in the task force. «Today we are protected in any case, because the technology is not yet ready. But in a relatively short time discussion will start about the use in confined areas, and our recommendation is that a very strict control mechanism has to be put in place in order to prevent the spread to only justified uses».

The situation of the research on somatic cells is very different, and several projects have already reached the clinical stage. «In this case – says the geneticist – our message is first of all to reassure the society and to show enthusiasm for somatic applications targeted to a clear therapeutic indication. There are mechanisms available for the governance and a solid scientific rational to move forward, we are at the beginning but we can expect considerable benefits. The gray area of enhancement, however, can still wait for the time being». The therapeutic use of gene editing falls in the general regulatory framework of the development of a new gene therapy, that is already regulated both from the legislative and regulatory point of view. Issues concern the so called “genetic doping”: the purpose of the genetic modification falls outside the therapy a serious disorder or a serious disability, to be rather directed to the strengthening of certain characteristics of the individual. «There we raised a red card. This is not the way to be followed, as per today. On this type of not-directly-medical applications we need at first to define a social consensus, which doesn’t currently exist. The risk-benefit evaluation should prevent these types of applications, but in any case we issued the recommendation not to pursue this path, at least to date», adds Naldini, who is also a member of the Italian National Committee for Biosafety, Biotechnology and Life Sciences. He further explains to NCF-Pharma World that, from the social perspective, enhancement might also involve unequal access for privileged individuals. «There are issues with fairness, about the ability to enhance differences rather than alleviate them», underlines the geneticist. In the United States, a formal mechanism is in place for discussion and acquisition of all social issues: the Recombinant advisory committee (RAC) examines all new gene therapy and genomic editing strategies in an open debate, where even the members of the non-scientific society have the possibility to express their opinion.

The genomic editing on somatic cells has opened new important therapeutic frontiers: today it is possible, for example, to inactivate a gene in a somatic cell to make it more resistant to infection by a virus (the application is undergoing clinical studies on patients with Hiv chronic infection of lymphocytes), or to produce more robust lymphocytes for adoptive immunotherapy of cancer. Gene editing might also allow to in situ correct a mutation, or to insert a new sequence at an exact point of the genome. «It is ambitious because it is more difficult compared to the inactivation of the gene, that is only the first step. The following repair by homologous recombination is more complex. This is the true, corrective, precision medicine, but it is still relatively inefficient. We are still in the field of laboratory research, new techniques are behind the corner and we expect to reach them soon», says Naldini. This is the reason why the institutions involved in the project worked for the development of recommendations to direct gene editing technologies for therapeutic applications. This type of applications, further tells the geneticist to close the interview, are absolutely acceptable when used on somatic cells of an individual bearer a serious disease or a genetic defect, because the inserted modification exhausts itself with the treated person. 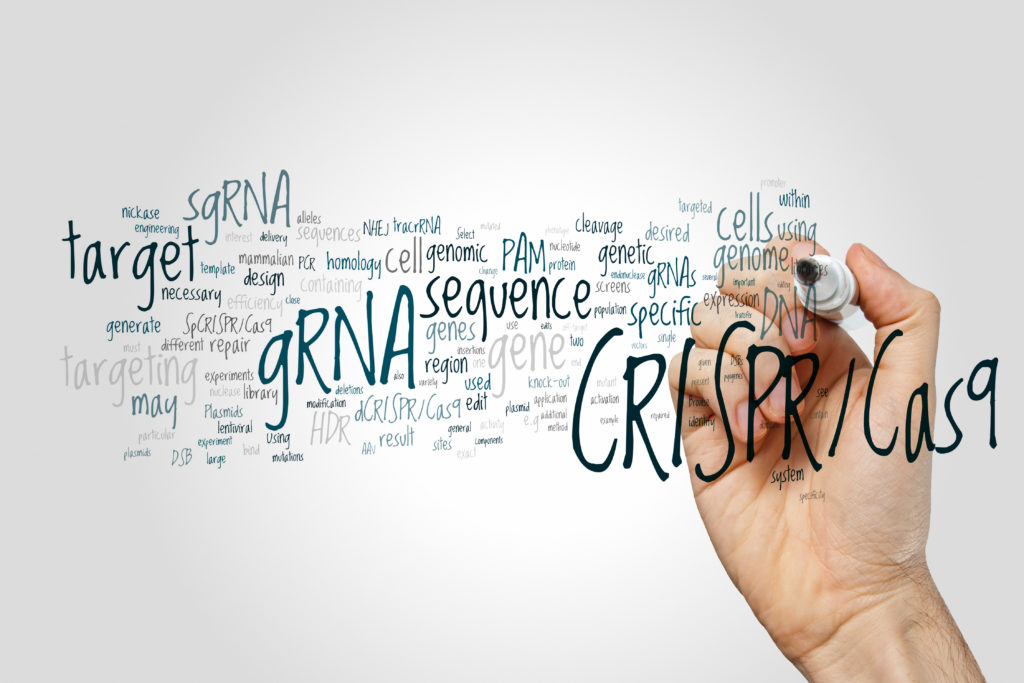 The daily news of the last two-three years reports a the huge growth of gene editing applications following the development of the techniques known as CRISPR-Cas 9, very easy to apply and inexpensive. The modification of the targeted DNA is actually something already existing well before CRISPRs techniques, and used for over a decade in many laboratories world-wide.  Many different technological platforms are available, all based on artificial nucleases that cuts the DNA at a specific site. Among the most commonly used are the zinc finger nucleases (ZFN) and the technique known as Talen. The birth of the CRISPR-Cas9 has made the generation of these targeted enzymes easier, as it uses an RNA probe. «It is not yet clear whether the CRISPRs are more specific than previous approaches. The dissemination of technology requires the need to direct its use, even the therapeutic one, which becomes more accessible – explains Luigi Naldini -. Today we dispose of a range of reagents, CRISPRs are probably the most versatile ones and it is likely that they will expand in the future»

The recommendations of the task force

The report “Human genome editing: Science, Ethics and Governance” recommends a set of principles that all countries should follow for the governance of research in the field of gene editing and its clinical applications:

The research team of the SR-Tiget began working on gene editing well before the appearance of the CRISPRs techniques, and developed a strong expertise especially on the use of zinc finger nucleases and applications on blood cells. The group directed by Luigi Naldini is currently working to develop one of the first gene therapies for the correction of blood stem cells to be used in the treatment of rare diseases. Gene editing is also applied to lymphocytes T, for use in the immunotherapy of cancer. «In collaboration with the group of Chiara Bonini, we produced one of the first evidences on how to use gene editing to enhance their action, an approach that has been further developed in UK to treat children suffering from leukemia», tells Naldini.