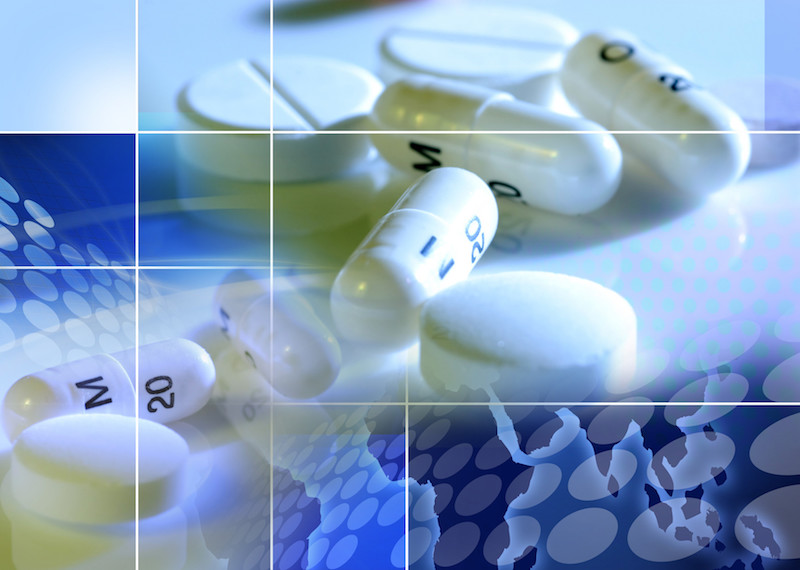 Morocco is an emerging player in the global pharmaceutical market, even if its domestic industry has a long tradition. The stable political framework characterising the kingdom and its central localisation in the Mediterranean area, connecting Sub-Saharan Africa, Middle East and Europe, may support Morocco to achieve a further consolidation of the pharmaceutical and healthcare sector in the upcoming years. The country is part of the Arab Maghreb Union (AMU), which comprises also Algeria, Tunisia, Mauritania and Libya.
An ambitious health insurance program was launched by the Moroccan government, with the objective to cover 90% of the population by 2021.

Morocco’s healthcare spend has reached $ 6.15 billion in 2017, with an increase of +5,1% compared to the previous year. The pharmaceutical market has also evolved positively, reaching $ 1.48 billion sales in 2017 with forcasts of $ 1.9 billion in 2021 at a yearly expansion of 6.7% CAGR (data BMI Research, Morocco Pharmaceutical and Healthcare sector report, Q3 2017).
According to this report, in 2016 the prescription medicines represent 70.9% of the whole market, around $ 993 millions. Patended medicines represented 41.2% of the total market and 58.1% of the prescription one, but this part would decrease in the coming years due to encouragement of generics and (very recently) biosimilars, because their prescription is strongly supported by Moroccan government. According to Business Monitor International (BMI) study, currently generics and biosimilars cover 80-90% of the public medicines market and only 25% of the private one. Also the OTC sector would undergo the same competition from generics, and is expected to decrease its share up to 22.8% in 2026.
Currently pharmaceutical sales represent approx. 1,47% of Morocco’s GDP and 24.4% of the total health expenditure of the African countries.
Moroccan pharmaceutical industry ranks second in the continent and is also the second largest chemical industry of the country, after the phosphates’ one.
The sector draws about 400 million dirhams investments every year and more than 9000 direct jobs.
There are three professional associations in the country representing the different industries, i.e. the Moroccan Association of Pharmaceutical Industry (AMIP), Les enterprises du médicament au Maroc (LEMM) of multi-national companies and the Moroccan Association of Generic Medicines (AMMG).

All pharmacists practicing in pharmaceutical companies are represented by the COPFR, which stands for Conseil de l’Ordre des Pharmaciens Fabricants et Répartiteurs and can be translated as the Council of pharmacists working in pharma industry and distribution. This institution controls the access to the pharmaceutical profession by giving an adivisory opinion for pharmacist applications in order to join pharmaceuticals as well as for the creation, expansion or modification of pharmaceutical establishments.
The COPFR has two main missions. The first one consists in the scientific role: the COPFR has to give a support to pharmacists working in pharma-industry and pharma-distribution by setting up a training plan and scientific seminars. The second mission is the disciplinary role, by ensuring compliance with regulations, ethics and deontology.
About 300 pharmacists are referenced in the pharmaceuticals including industries and distribution. They hold different positions and responsibilities. They supervise the pharmaceutical acts (control of raw materials, packaging materials and finished products, production, storage, release, …).

A long tradition in pharmaceutical manufacturing

The local pharmaceutical industry sees both domestic companies, such as Cooper Maroc (founded in 1933 as a subsidiary of Cooper Melun France), Maphar (now part of the French Eurapharma CFAO Group), Sothema (founded in 1976 and manufacturing inter alia sterile products and antibiotics) and Laprophan (founded in 1949, the first Moroccan laboratory to have an R&D center), as well as subsidiaries of foreign multinational companies such as Sanofi Maroc. The total production capacity counted 46 different sites in 2016, manufacturing approx. 425 million units.

According to AMIP, the local pharmaceutical production covers 65% of the internal pharmaceutical market, while 10% is intended for export. The great part of active pharmaceutical ingredient are imported from abroad, says BMI.
As reported by the Association of the Pharmaceutical Industry, the Moroccan National Laboratory for the Control of Medicines (LNCM) has been certified both by the World Health Organisation and the European Directorate for the Quality of Medicines, thus acknowledging for the quality of the production run under GMP conditions. But BMI reports that the Moroccan pharmaceutical production is still far from European standards, even if the government has assured about “its commitment to improving the country’s regulatory system”. New agreements were signed in May 2016 between the Moroccan government and local pharmaceutical associations in order to expand the manufacturing capacities on a national scale and to establish the kingdom’s first pharmaceutical clusters. Synergistic to this action should also be the announced reduction of regulatory approval times with respect to registration of new medicines.
The generics sector invests each year approx. 300 million MAD (15% of which in R&D activities), writes the local association AMMG on its website, and employs 3.500 people. The majority of generics medicines present on the Moroccan market are locally produced, while Africa and Middle East are the preferred areas of export (counting for 8% of the generics’ production).

Morocco is among the North African countries benefiting from a higher political stability, a liberal economy and an educated workforce; practically, all important elements in order to attract foreign investments. This is paralleled, in the pharmaceutical and healthcare areas, by the liberalisation of the capital stock of pharmaceutical companies and, from the regulatory perspective, from a reform that took place in 2006 aimed to improve the compliance to ICH recommendations and international quality standards for manufacturing of medicinal products.
Regulatory procedures are under the control of the Drugs and Pharmaceutical Directorate of the Ministry of Health. The latter is divided into three subdirections: firstly, the Division of Pharmacy (responsible inter alia of clinical drug evaluation, registration and pricing where appropriate); secondly, the Pharmaceutical sector monitoring department (e.g. scheduling inspections in order to establish GMP certificate) and finally, the LNCM which is responsible of the quality review of pharmaceutical documentations as well as of lab-testings.

The mechanism of the pricing of medicines depends on their status: innovative, generics or biosimilar. Prices of medicines have also been repeatedly reduced in the period 2010-2016, a possible element lowering the appeal of the country for foreign investors, according to BMI. A new price decree was adopted by government in December 2013 comparing ex factory prices of countries of reference (France, Spain, Portugal, Saudi Arabia, Turkey, Belgium, and the country of origin when it is different from the mentioned list)

The government also planned actions to reduce retail mark-ups and VAT for chronic illness medicines, and to improve the medicine supply chains, increase the number of qualified staff and facilities and promote the rational prescription of medicines, adds the report by BMI. Plans are also ongoing to eradicate the Hepatitis C Virus by 2030.

On another level and under the control of the Ministry of Health, there is also the Pasteur Institute of Morocco, devoted to basic and applied research and which provides expertise, biological analysis and advice not only to the administration, national, regional or international institutions but also to the pharmaceuticals. This Institute is also responsible for the manufacture, import, and distribution of some vaccines, serum and biological products for therapeutic use and diagnosis.

From another perspective, the Intellectual property protection is ensured by the free trade agreement with the US signed in June 2004 and the patent law issued in 2000, which complies with the WTO Agreement on Trade-Related Aspects of Intellectual Property Rights (TRIPS). This law prevents the parallel import of patented products.

The ability to quickly adapt to the rapidly evolving scenarios and the deep knowledge of its international reference framework are essential, according to AMIP, to maintain the competitive position of the Moroccan pharmaceutical industry. From its website, the Association calls to an urgent effort to better delimit the economical boundaries of pharmaceuticals. According to Business Monitor International, the new Moroccan government is expected to continue pursuing the roadmap of reforms, to ensure a better access to healthcare services even if the total budget allocated by now (5.7% in 2017) is still lower that the level recommended by the WHO (12%).
The pharmaceutical and healthcare internal markets are also sustained by an increased shift of the population towards the middle class; furthermore, as for the great part of countries, the ageing of population is an increasing issue also for Morocco, especially in the urban areas. The Mandatory Health Insurance scheme introduced in 2006 for Moroccan citizens and provided by the National Agency for Health Insurance (ANAM) is aimed to allow broader access to healthcare service, but according to the World Bank in 2017 this measure still does not reach over 25% of Moroccans.